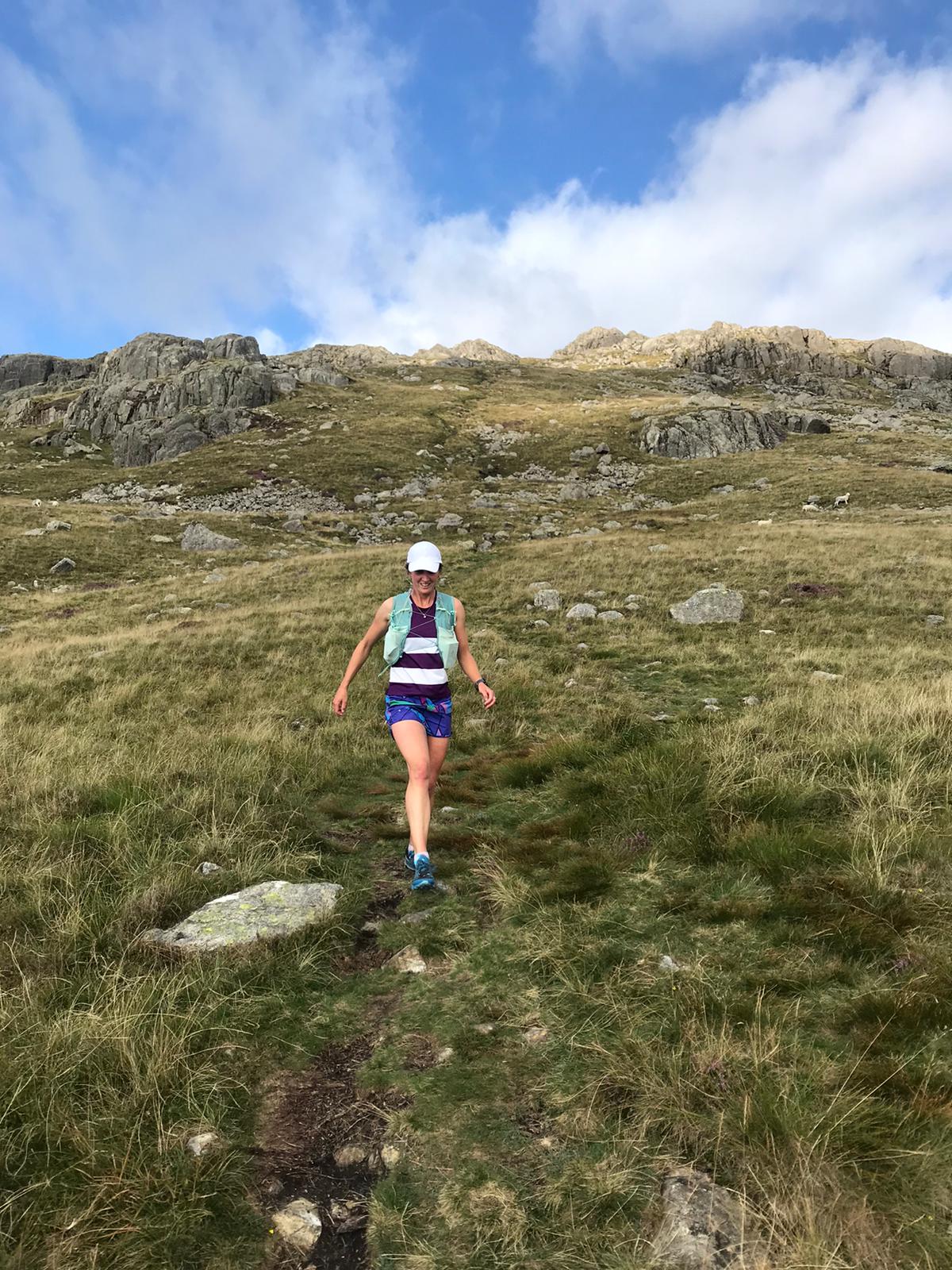 A great run from Meghan and Martyn on leg 6. 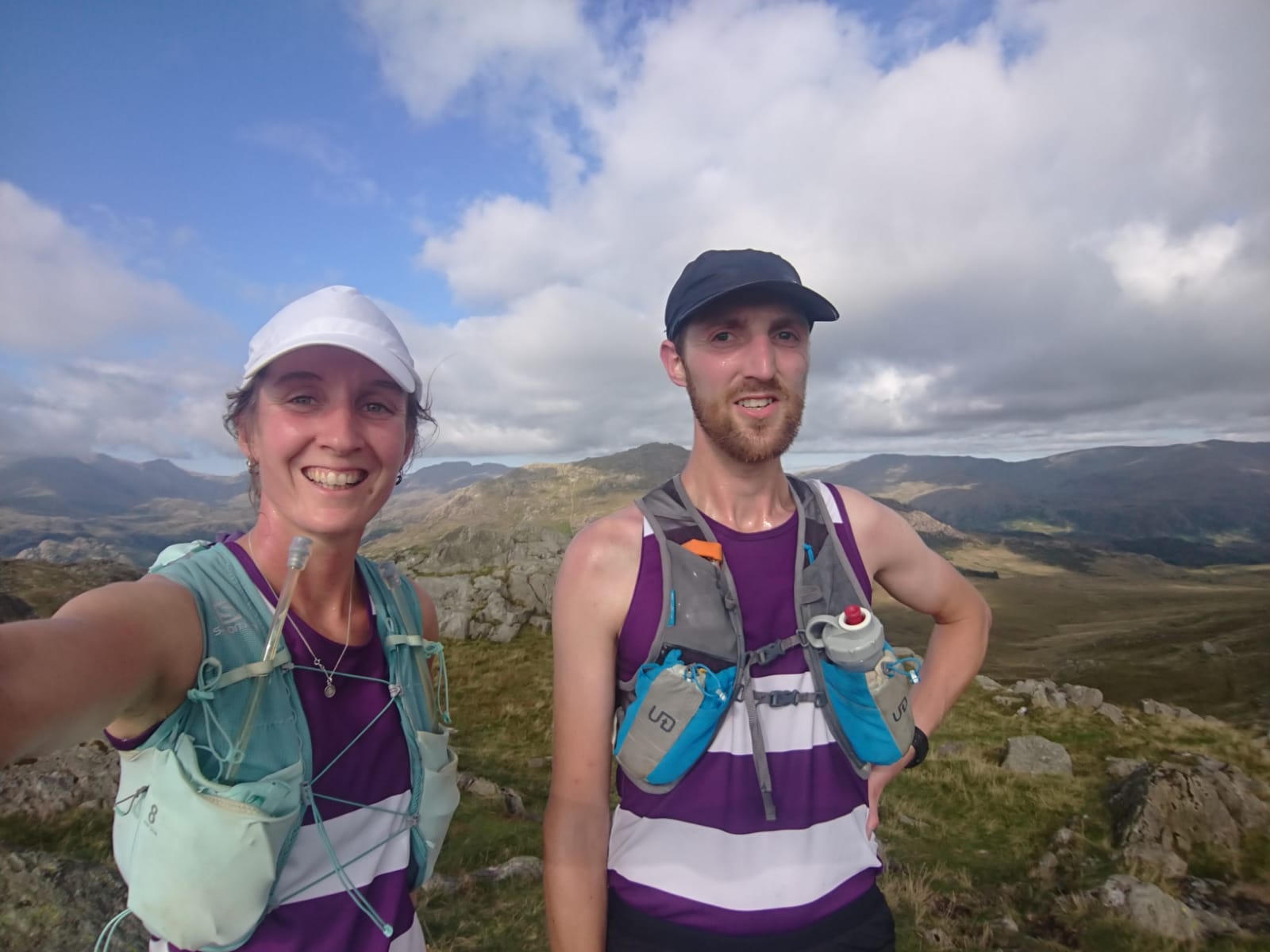 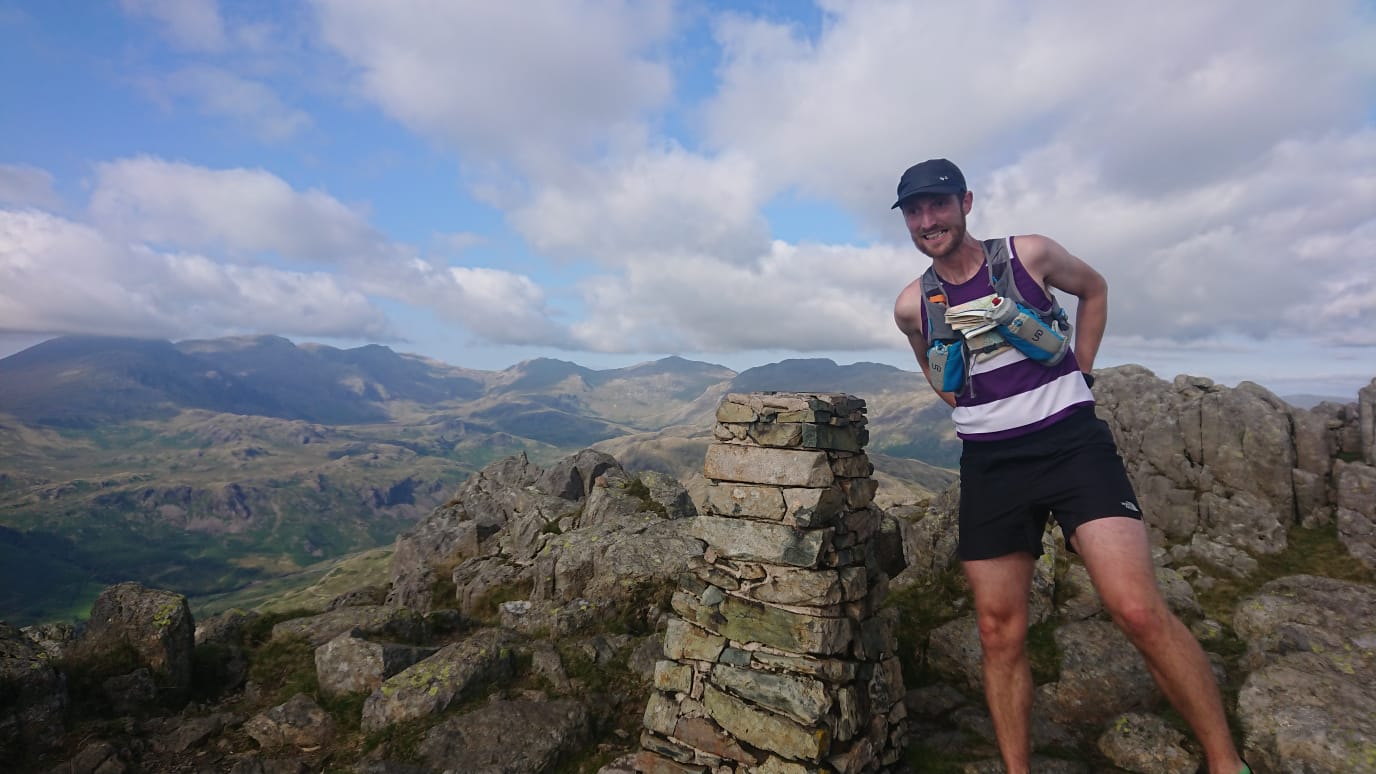 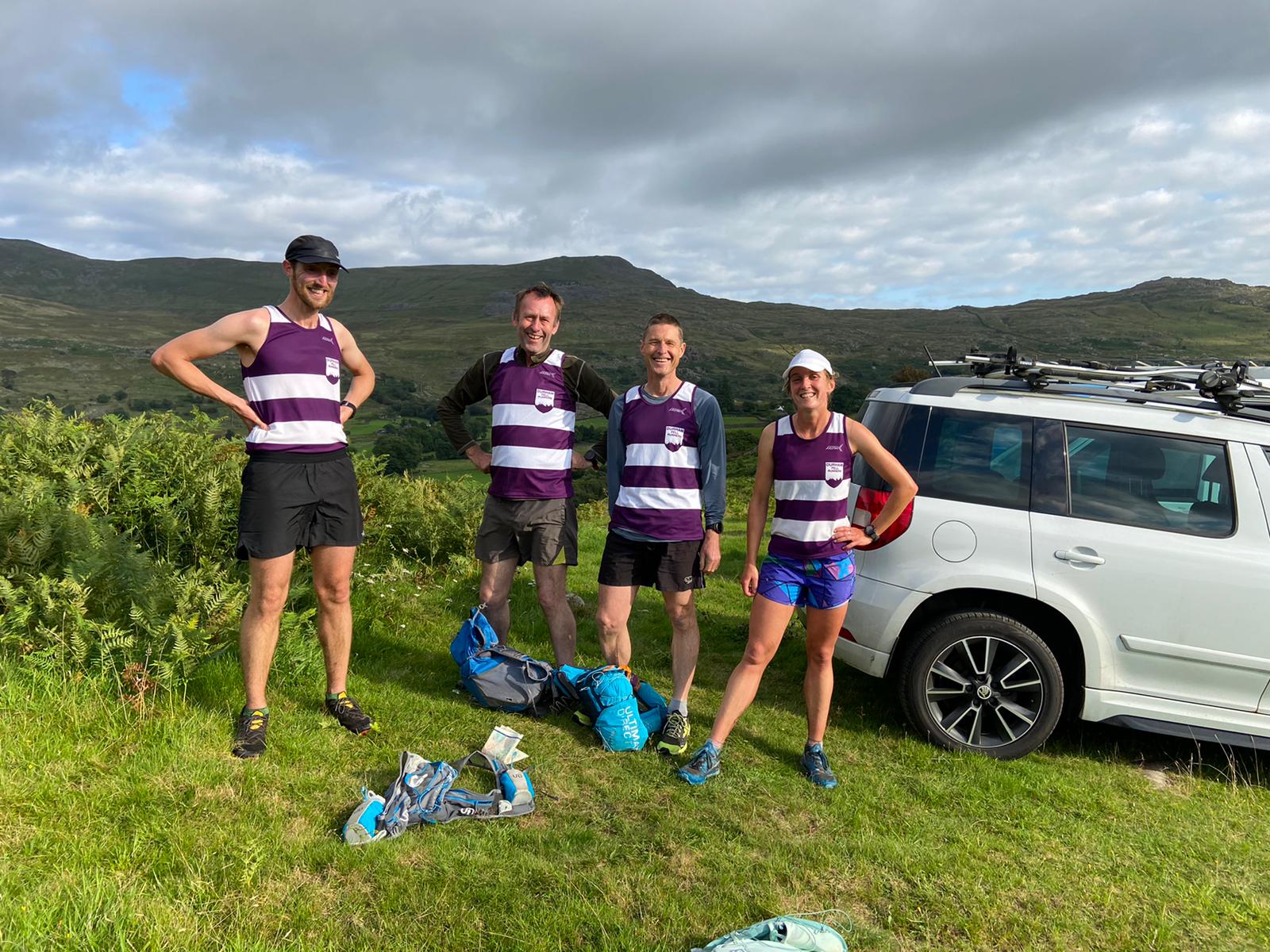 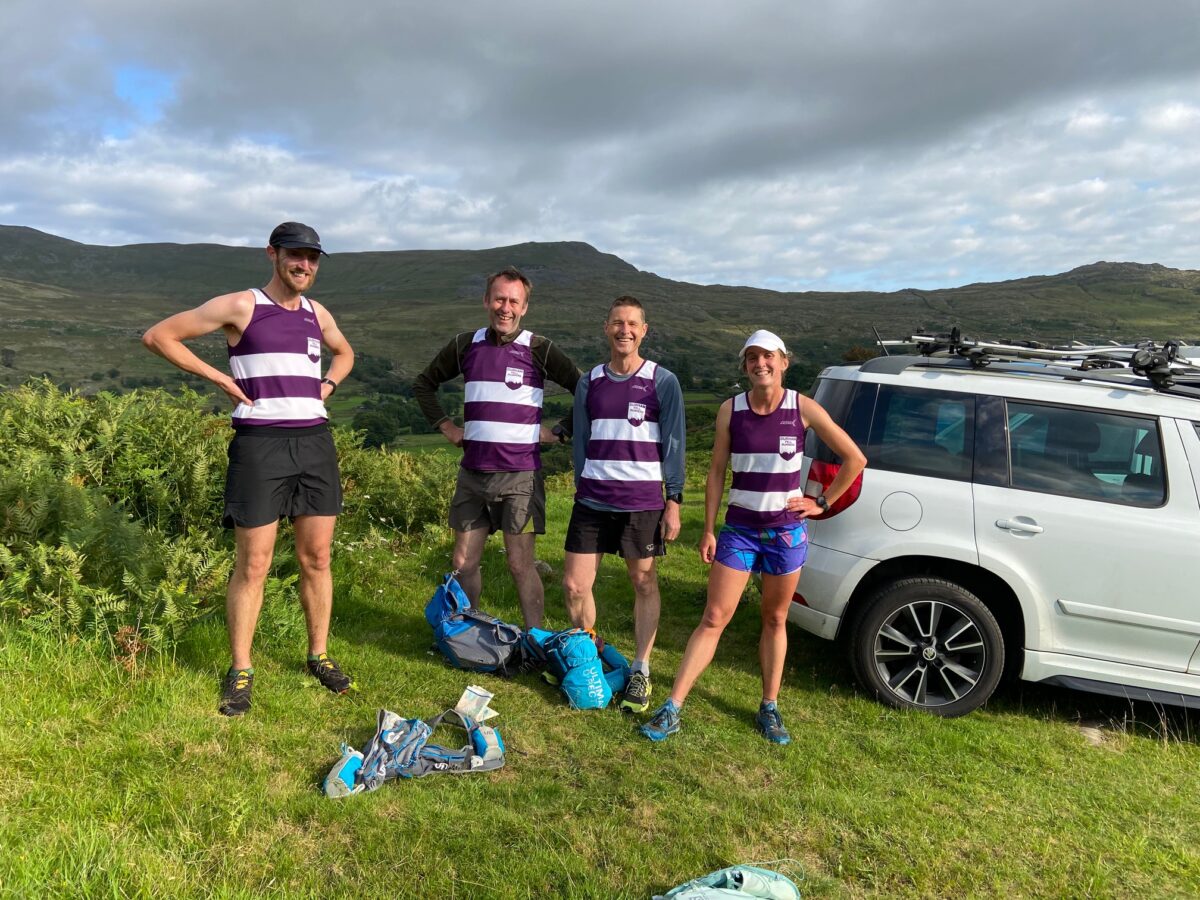 Left from Hardknott pass, Martyn setting a strong pace up Harter Fell. I caught up a bit as the climb steepened and we hit the top with no bother. Down off the other side, a boggy splodge and up the gentle climb to Green Crag. Another top ticked and then we trundled down off the fell, catching the sneaky hidden footpath down to the stepping stones. Then Martyn smelt the finished line and put in a burst to the finish, whilst I huffed and puffed up the last little climb to the road. Changeover made, we waved Dougie and Alan off into what turned out to be a fabulous sunset.
https://live.opentracking.co.uk/dfrw21/

Big day out in cloudless skies. Ticked off some big mountains including scafell, scafell pike, great end and bowfell. We had a great day moving well over tough terrain. Managed to stay on route finding some nice little trods around the minor prominences that wainright felt unworthy of including in his list! Great fun. 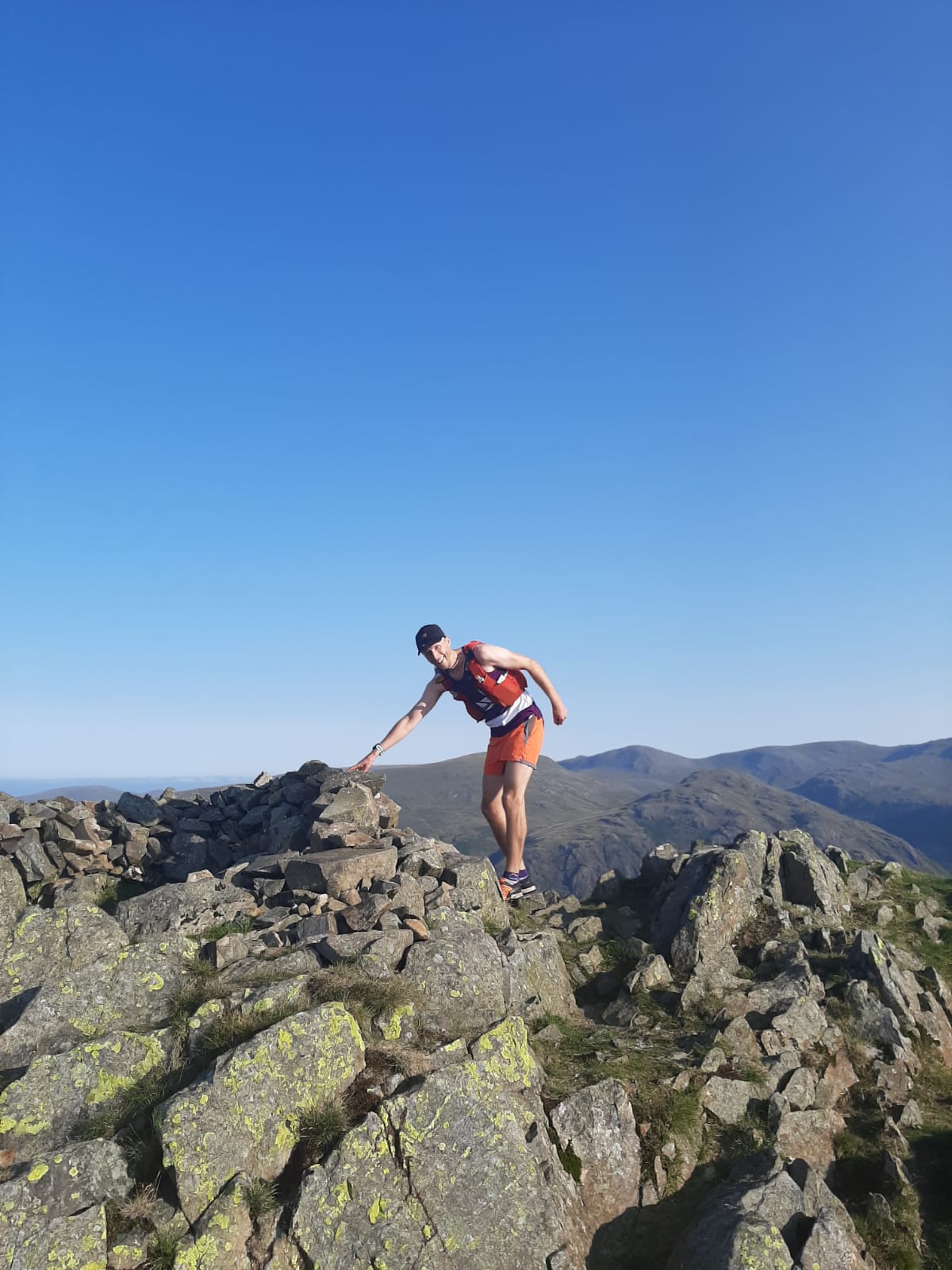 Another glorious weather day and it looks like James and Graham are making the most of it. 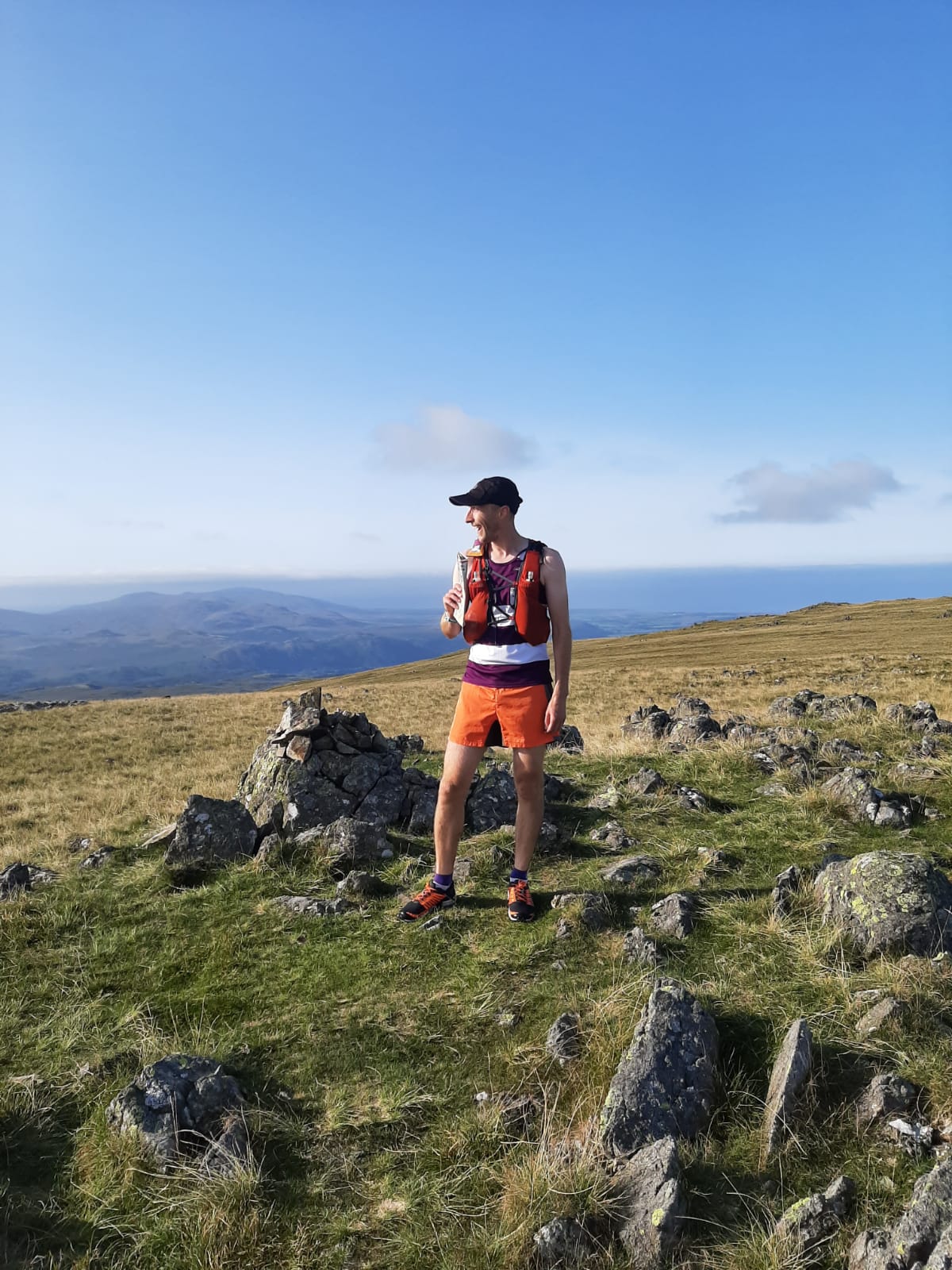 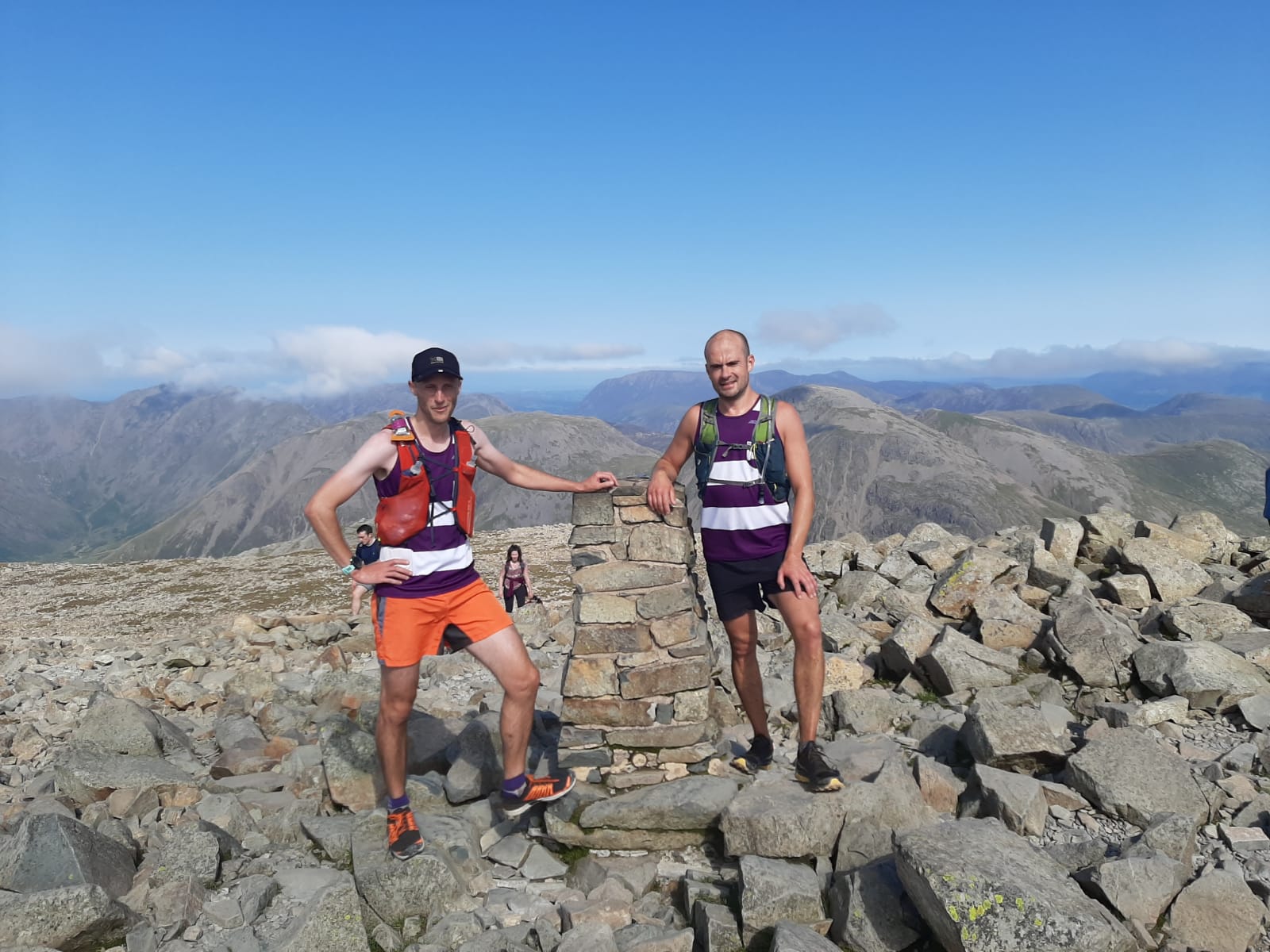 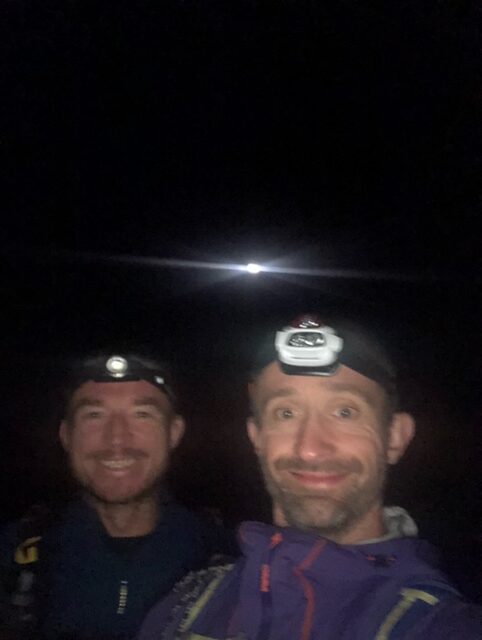 Leg 4 started at the rather antisocial time of 1am, as we stood shivering in the car park wearing jackets Rory and Dan ran in sweating ; clearly we were overdressed.
The first climb of Grike has little to recommend it other than it gains plenty of height which we weren’t to lose until the descent of Yewbarrow near the end of the leg.
The next section is mostly on familiar ground being the reverse of the Ennerdale race route, however it being night and running it backwards meant a careful eye was kept on navigation by Adam for the first part and Andy for the second part being the bits we had recced.
One minor nav error was spotted by Adam in the return from Pillar as Andy was engrossed in explaining the origins of the many universe theory, perhaps in another universe we didn’t miss the trod and all was well! Error quickly recovered and the climb and then losing descent of Red pike went without incident (is this the top? No, how about this one? No? Maybe the next…)
The final section was always going to be the crux, BG trod to Yewbarrow, followed by an unreasonably steep gully descent, then the climb of Knot End (not a Wainwright but right in the way), the descent of Knot End is on unreasonably rocky and bracken infested ground followed by the unreasonably steep climb of Seatallen, soon after the unreasonably steep descent of Seatallen followed by Middle fell with its unreasonably steep descent. We were both suffering at this point and were ready to be done.
Buckbarrow is in comparison to the previous hills perfectly reasonable, we descended to meet James, Graham and Martyn at the road crossing.
The weather was perfect throughout, moon and star light lit the way, barely a breath of wind and a fine warm dawn.
I hadn’t run with Adam before but we were well matched for pace, Andy learned a lot about David Bowie’s back catalogue and Adam learnt that Andy gets distracted when talking about physics. 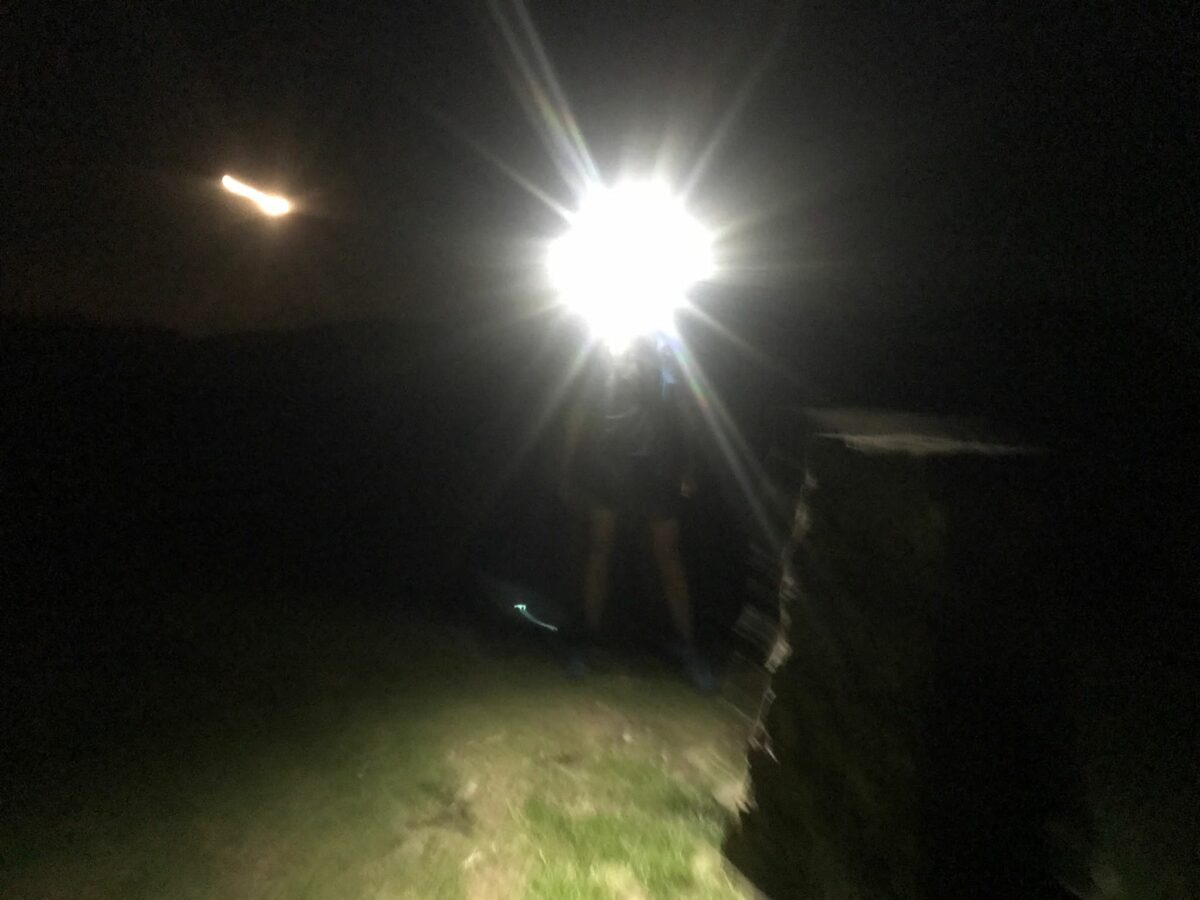 Rory and Dan had a solid run on their night leg. Great work. 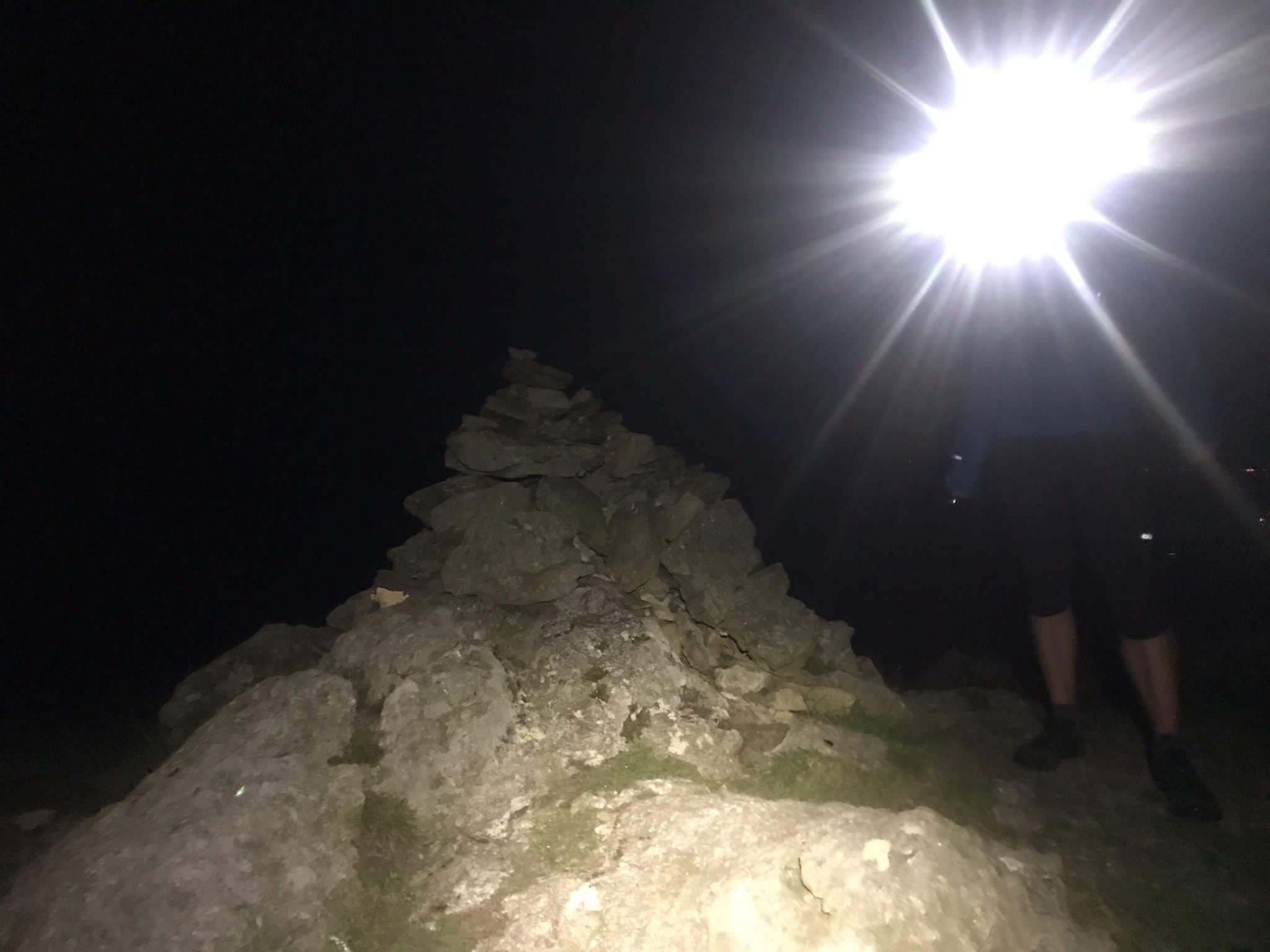 Sent from my iPhone
Couldn’t have asked for a better night for running! Stars and moon out, and dry under foot. It was all going well until I commented how much being able to see all the street lights helped to keep your bearings and then missed the path in the dark and convinced myself we needed to head completely the wrong way to correct the mistake. Sorry for dragging you through all the bracken and bog and head high thistles Dan! The rest of the leg was uneventful and we managed to get down in time for me to get a bit of sleep and Dan to drive back home to go to work in the morning! I’m not sure how much I’m looking forward to going again tonight!

What a glorious day to be out on the hills! The tourists were getting in the way on the roads, and I was mildly nervous leg 1 might have a blinder and get to the changeover before us. Needn't have worried – Max and Paul's timing was exactly as estimated! Away Martin and I went after a very slick changeover of the tracker. Long drag up to Bessyboot – it was clear it was going to be warm out on the hills. Found a nice line on the vague trods over to Glaramara, and managed not to lose the path to Allan Crags. Sprinkling Tarn looked very inviting for a dip, but no time to stop as we trotted on to Seathwaite Fell: never been here before and great views down Borrowdale. A big down and up to Base Brown, then up to the Gables. What a rare treat to have the summit of Great Gable to ourselves – in fact we didn't see anyone else on any of the summits. Down the hideous screes off Gable, dodging rocks raining down on me from a following Martin. An annoying out and back to Kirk Fell, then just Brandreth and Grey Knotts. No-one knows which summit counts so we bagged both on Grey Knotts, then down to a patiently waiting Andrew above Honister, ready to carry to baton on to leg 2 part 2… 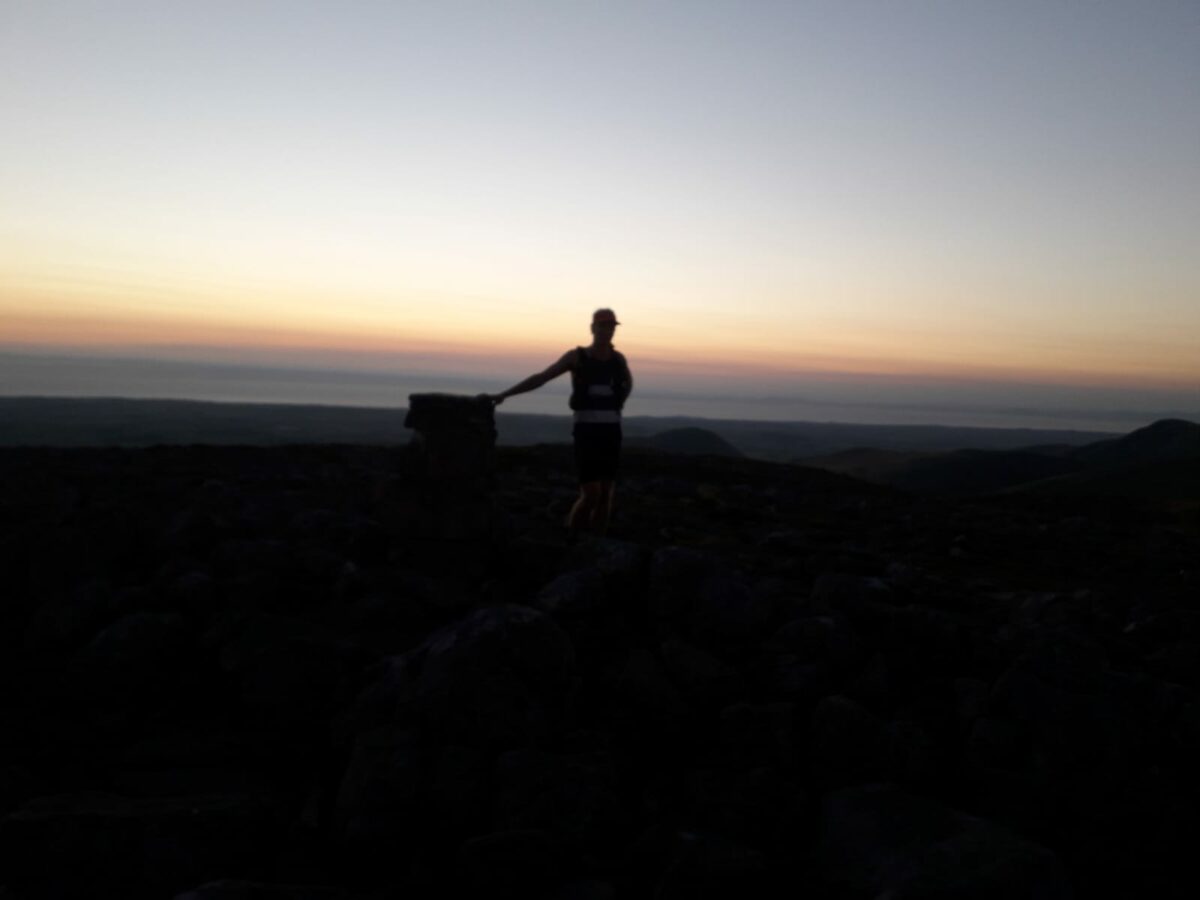 As the sun sets on Day 1, Martin and Andrew reach the summit of Great Bourne, well on their way to finishing this monster leg on schedule.
You can follow our progress by clicking on the following tracker link
https://live.opentracking.co.uk/dfrw21/