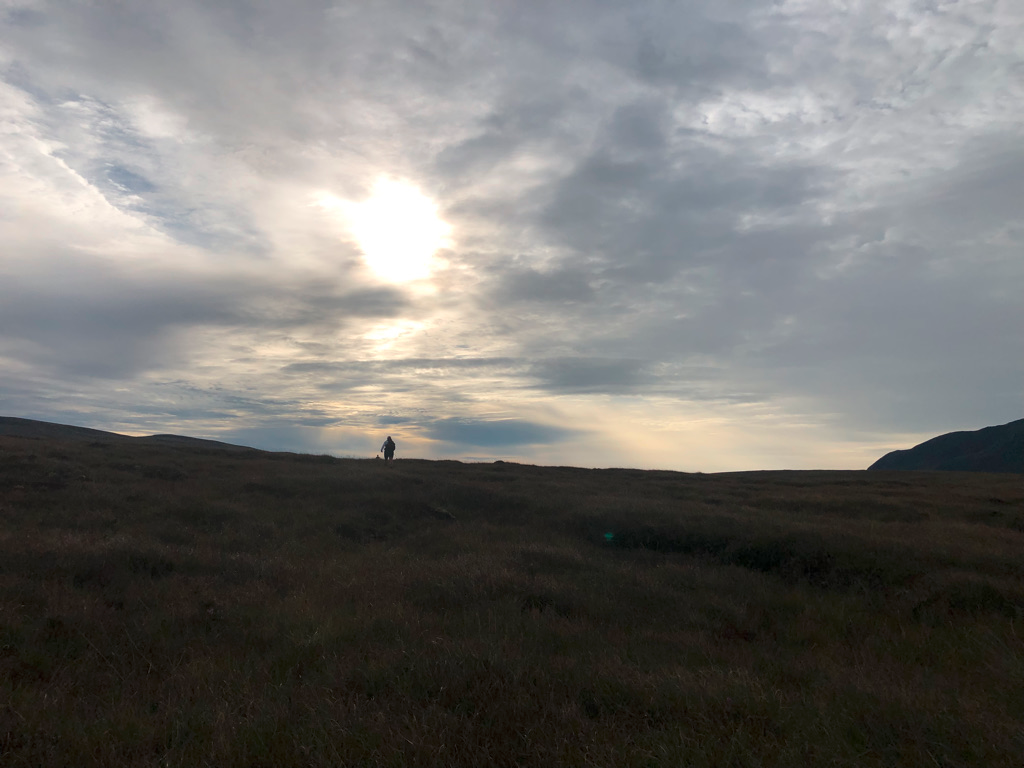 For Andy and I this event came at the end of a month long van/cycle touring family adventure along the length of the Outer Hebrides and then back down through mainland Scotland. Our participation in the event was only possible thanks to the dedication of my mum who drove up from Durham, and met us on the Arran to take over childcare duties for two days whilst we went and destroyed ourselves in the mountains.

As a result of all this, we were probably the least prepared running wise that we have ever been going into one of these events. However, this did mean that I was probably the most relaxed. The pressure was off. If I was rubbish then I had 5 weeks of little to no running to blame! The weather was set fair and as we took the short ferry ride from Ardrossan to Brodick and the mountains of Arran came into view then I felt really excited for the weekend ahead.

We were not the only Durham Fell Runners to have made the journey. Steve Lumb and Tom Carter were taking on the A course (running with separate partners), Digby Harris was on the long score course and Meghan and Rory were running together on the C course. Here is my account our Arran adventure.

The weather was incredible and as we set off we were in high spirits. The first few checkpoints were relatively straight forward and there were plenty of cheerful and friendly exchanges with fellow teams on the hill. Our first decision came as we looked at our route from CP 4 to 5. Andy was very taken with a route that went over an inviting and attractive looking ridge. I was more keen on a riskier route that descended below the ridge and contoured through a bog. As we mulled over ‘midge or ridge’ neither of us were keen to budge. In the end we went midge and I was relieved that it was a good line! Then from CP 5 – 6 the fun really started. It looked relatively straight forward on the map. What the map didn’t tell us was just how horrific the terrain was: tussocks, reeds, tree saplings for four long kilometres. The cheery exchanges with fellow teams were now grumblings and mutterings about how slow and grim the terrain was.

After finally reaching CP 6 we were heading inbound to mid camp. Although there was still a long way to go, it felt good to be heading in the right direction. One more decent climb ( I am sure it was steeper than it appears in this photo. It certainly felt it!) and then everything else was pretty straight forward until our final route choice to the final CP of the day.

Andy was keen on the direct line. I had spotted a slightly longer route that got us off the rough ground more quickly and joined a path along to the CP which was on the path/stream junction. I was tired. I wanted to be off the hill. It seemed a safe option. Andy didn’t feel strongly about his route and so we took my line. And we were glad that we did. The direct route down off the hill to the CP went through what was marked as ‘mixed woodland’ on the map. In reality this was impenetrable rhododendrons, trees and gorse. Many teams lost a lot of time negotiating this. Finally the finish was in sight. We were very relieved to have made it.

Midcamp: As we made our way towards the camping fields we saw a guy eating his meal in the middle of the road. ‘Are the midge that bad?’ ‘Yep’. He was not wrong. The midge situation was desperate.

A respite from the midge was provided by a Ceilidh (with bar) that had been arranged by the organisers. A room full of sweaty runners all in their hill gear giving their all to some excellent dancing must have been quite the sight.

I am not sure how to give an account of day 2 without it being a massive whinge but I will give it a go! This was the hardest day I have ever had on a mountain marathon. Maybe the hardest day in the mountains I have ever had! The lack of fitness played a part. My base fitness was good enough for one tough mountain day. When I asked my body to go again the next day, it did not have a lot to give.

After a glorious 400m along a path, the day got going with our first climb. Up through wet grassy tussocks which made my legs (cut to ribbons by the previous day’s fun) sting like crazy and then deteriorating into loose, grumbly rock that just came away in your hand. It’s 745am.

Me: Is it too early to lose my sense of humour?

CP 1 was successfully located and we tried to rally ourselves. It was another clear and beautiful day. The sight of runners silhouetted against the skyline struck me. This is a pretty crazy game to play but there are these incredible moments of peace and calm among the stress.

We were taking each CP one at time, trying to remember to eat and taking turns to boost moral when low moments became too much. And then we reached a rising contour into a hanging valley across rough boulder and heather covered ground. This was the lowest of the low points. As we approached the ridge line to a checkpoint ‘cross on a hill’ (I think I will always remember this one) it was all too much.

Me: I just can’t do it any more

Andy: Well I’m not going back down through that **** ground

Me: I don’t want to go back down there either

Andy: Well then you’ll have to keep going up

Andy: What do you want to do then?

Me: Call for help

Andy: Fran, I am not calling Mountain Rescue

Upon reflection. I think Andy was right. To call for help was not the best course of action. He let me sit down for a few minutes, gave me a gel and we regrouped for the final push because as it had taken us so long to get to this point we were now in a race against the clock to beat the 4pm cut off. Miss the cut off and we would DNF the whole weekend. Brutal. The next checkpoint was the summit of Goatfell and then it was a long and painful descent down to the finish line. It was tight but we made it with just 10 minutes to spare. The sight of my mum and the boys at the finish line was such a joyous feeling (although they had spent so long waiting they were more interested in their snack they’d just been given!) and there was so much relief at having made it.

In the end we finished 26th of 29 finishers. 14 teams DNFd so I like to count these and say that we finished 26th of 43 starters. Meghan and Rory finished 5th in the Short Score. Digby Harris finished 9th in the Long Score. Tom Carter did not finish a brutal A course. Steve Lumb’s partner was injured during day 1 on the A course so they did not complete. He ran with a new partner on day 2 (as her partner was also injured) and so completed with A course with an *!